Winmalee Rural Fire Brigade is one of many Volunteer Brigades located across the State of New South Wales, Australia. The Brigade started life as North Springwood Bush Fire Brigade in 1963 and currently has approx. 50 operationally active members with a reserve of approx. 150 people, with a total fire fighting experience in excess of 2200 years. For more information about the life of the Brigade, please see our history page.

The Brigade has adopted the Road Runner as its mascot which has been approved by Warner Bros. Studio.

Our active members are linked by an alpha numeric pager system which is activated to enable members to respond to emergencies. It is also used as a general communications tool.

Winmalee is set in the scenic city of the Blue Mountains, approx. 85 km west of Sydney. Our local area of responsibility, Winmalee/Hawkesbury Heights/Yellow Rock is largely a bushland urban setting with some rural areas. The area has a population of approx. 10,000 people in 3000 homes.
Our main station is in Hawkesbury Road, Winmalee; with a second station in Singles Ridge Road. We have two Category 1 Tankers, one housed at Winmalee and the other at Singles Ridge Station. Our Urban Pumper and Personnel Carrier are also housed at the main station. For more information about the Brigades vehicles and infrastructure, please see our vehicles page.

Fight Fires in the Scrub/Bush 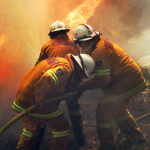 This involves fighting fires that are both close to property and in remote areas, only easily accessible by helicopter. The fires that we respond to could either be in our local area, within New South Wales or within other States or Territories of Australia. 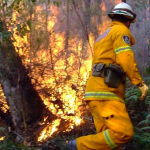 This involves planning and implementing controlled prescribed burn offs of leaf litter and other fuels on the forest floor to reduce the effect of major fires in the future, should they break out. Another task that we undertake is public education on how best to be prepared in the unfortunate event of a fire. 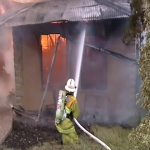 This involves attending house fires, motor vehicle accidents and minor hazardous material incidents in our local area in conjunction with the NSW Fire Brigade. We also respond to wind and storm damage in support of the NSW SES, as well as search and rescues in support of the NSW Police Force.

Some Roles within the Brigade

The Brigades Field Officers are voted in by the operationally active members of the Brigade and are appointed by the Local District RFS Superintendent. The Field Officers take care of the day-to-day operations of the Brigade. Broadly, insuring all the above that is specified under “What we do”, running their designated crew weeks, training activities, generally ensuring that the membership and the stations operational equipment is ready for a response to an incident at any given time.

The members of the Brigade greatly help out their Field Officers in all their tasks, to varying degrees of independency, but under the command and guidance of the Field Officers. This is because, running an active Volunteer Fire Brigade is a time consuming and demanding task that requires strong teamwork.

Currently the Winmalee Rural Fire Brigade has 8 field officers to manage the operational running of the Brigade. They are the Captain, Senior Deputy Captain and six Deputy Captains. 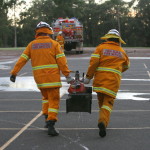 We have 3 Station Officers (SO). Our Station Officers rotate around the clock during major incidents such as Running Fires, Storm Damage and Search and Rescue. During their shift they will organise relief crews, the feeding of the crews, liaise with the general public and provide support to the field crews.

We have a Social Director. They play a key part in fund rasing for and organising social events for the Brigades membership and there families . 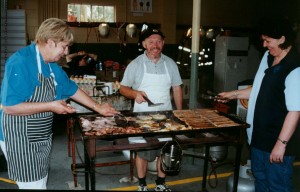 Other key roles that members play is the weekly maintenance of equipment, the maintenance of the stations grounds and assisting in the Training of RFS personnel within the Brigade and within the organisation as a whole. This often means a greater commitment beyond the normal training and meeting times of the Brigade.